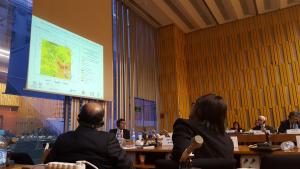 On 15 – 16 December 2015, the final project meeting for the Groundwater Resources Governance in Transboundary Aquifers (GGRETA) project was held at the UNESCO Headquarters in Paris, France. This final project meeting was attended by representatives of the donor agency, the Swiss Agency for Development and Cooperation (SDC), and all project partners as well as diplomats from the case study countries and Switzerland. The aim of the meeting was to share results from Phase 1 (2013-2015) and discuss a potential Phase 2. During this meeting, Ambassador of Swiss Confederation H.E. Mr Jean-Frédéric Jauslin announced that the SDC has indeed decided to fund phase 2 of the project.

The main objective of day 1 of the meeting was to present the main findings of GGRETA Phase 1. After the official opening by UNESCO-IHP representatives and statements from delegates from project countries as well as Switzerland, results were presented for all three case studies. On behalf of IGRAC, Director Neno Kukurić presented the Multidisciplinary Assessment Methodology used in all case studies and the GGRETA Information Management System (IMS) developed by IGRAC.

Day 2 of the meeting mainly served as preparation for the second phase of the GGRETA project. After a plenary session in which the main objectives for GGRETA Phase 2 were presented, working groups for each case study were formed to discuss integrated assessment findings and recommendations for phase two in parallel sessions. In the final plenary session that followed, rapporteurs presented reactions and recommendations from case study working groups leading up to a final general discussion. 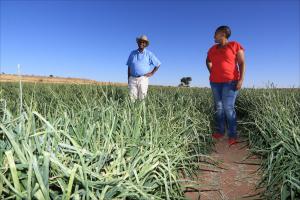 Three weeks prior to the final project meeting, a 2nd stakeholder consultation meeting was held in the project area in Mariental, Namibia. During this meeting, organised by UNESCO-IHP, project results of the Stampriet Transboundary Aquifer System (STAS) case study assessment were presented to experts and representatives of local institutions with the aim to receive suggestions that can be considered in a next phase of the project. The meeting was attended by governmental officials from all three case study countries (Botswana, Namibia and South Africa) and local stakeholders like representatives from several farmers associations.

Senior Researcher Geert-Jan Nijsten and PhD Research Fellow Kirstin Conti contributed to the meeting on behalf of IGRAC. Nijsten presented the GGRETA IMS and Conti was involved in UNESCO’s From Potential Conflict to Cooperation Potential (PCCP) workshop, which was held on the second day of the stakeholder consultation meeting.

The GGRETA Project addresses issues related to Transboundary Aquifers and responds to the pressing need of increasing the knowledge on their physical and socioeconomics characteristics.