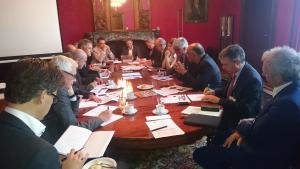 As The World Bank's Senior Water Specialist Marcus Wijnen stated in his opening remarks, groundwater in the Netherlands is often considered a boring topic. "But I think that can be seen as a compliment, because that indicates that it is well-managed". This was also what caught Junaid Ahmad's attention and trigger a meeting with representatives of the Dutch groundwater sector that was hosted by IGRAC last week.

Groundwater management is high on the agenda of The World Bank's Water Global Practice (WGP), a programme which aims to support the implementation of the Sustainable Development Goals (SDG's) and ensure water plays its role in ending extreme poverty. WGP envisions that groundwater management will play a key role in reaching these SDG's under impacts of climate change on the global water resources. This is also why the WGP already has taken the initiative to raise awareness for groundwater on a higher policy level, advocating that groundwater should be stronger presented in climate adaptation debate at CoP21, which will be held later this year in Paris.

The roundtable was very dynamic and informative, delivering a clear focus on possible groundwater topics and instruments for their implementation within the WGP activities. Accordingly, further joint actions are agreed as well.