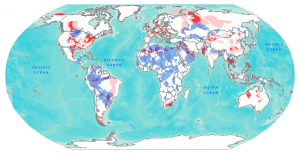 IGRAC has made a map which overlays its Transboundary Aquifers of the world map 2015 with a shale layer. The aim of this map is to provide a global overview of the spatial relationships between transboundary aquifers and some of the major shale plays and shale basins in the world. This 'Shale Transboundary Aquifers Map' has also been included in the Global Overview module of IGRAC's Global Groundwater Information System (GGIS).

Shales are fine-grained, clastic sedimentary rocks predominantly comprised of consolidated clay sized particles that were deposited as muds in low‐energy depositional environments. Deposited with these very fine‐grained sediments is organic matter in the form of algae, plant, and animal derived organic debris (Arthur et al., 2009). Once covered up by other sediments and buried over millions of years, heat and pressure begin to work on these sediments and gas is formed. The shale formation is both the source and the reservoir for the natural gas, which is predominantly methane (~90%) but may also contain other hydrocarbons, carbon dioxide, nitrogen, hydrogen sulphide, and rare gases (Lapidus et al., 2000). Part of the gas may migrate upwards and become trapped between layers of sandstone and porous limestone.

The term "shale play" refers to a geographic area where gas in shale rock has been discovered in significant quantities, enough for gas companies to launch an exploration campaign. Shale gas has long been considered inaccessible due to high drilling costs and because shales lack sufficient natural permeability for the recovery of gas at rates suitable for large-scale production. The use of ‘fracking' in conjunction with horizontal drilling has opened up natural gas resources that had previously not been commercially viable (US EIA, 2010b).

Wood et al. (2011) state that the potential for groundwater contamination is a key risk associated with shale gas extraction. Evidence of a relationship between methane contamination of shallow aquifers and shale gas exploitation has been recently documented (Osborn et al., 2011). Drinking water resources as well as ecosystems can also be affected by contaminated water (Haluszczak et al., 2013) released by the well after injection.

Click here to download the Shale TBA Map. The map has also been included in the Global Overview module of IGRAC's Global Groundwater Information System (GGIS). You can find this overlay under the "Other Overlays" dropdown menu in the sidebar.

The shapefile of the overlay used to make this map can be found here: http://www.unconventionalenergyresources.com.