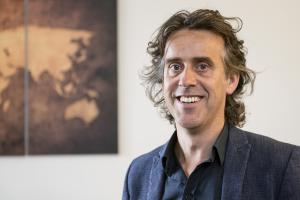 Geert-Jan Nijsten, Senior Researcher at IGRAC, gave a presentation on the worldwide assessment of transboundary aquifers with focus on the African continent during the 15th World Water Congress in Edinburgh, Scotland. His presentation was part of session PS12.1 ‘Transboundary Water Resources: Aquifers', which was held on Wednesday 27 May 2015.

In his presentation, Nijsten focused on the baseline assessment that has been undertaken as part of the Groundwater Component of the Transboundary Waters Assessment Programme (TWAP). This Groundwater Component has collected data on 199 transboundary aquifers (TBAs) and the groundwater systems of 43 Small Island Developing States (SIDS). Data were collected using networks of national experts and literature surveys.

Figures presented in the conference gave an insight into the data collected during the programme and showed results of the TWAP groundwater indicators across transboundary aquifers in Africa. Based on the data, indicators have been calculated describing the groundwater systems in terms of their hydrogeological, socio-economical, environmental and governance dimensions. These indicators will provide a regional picture of the current state of transboundary groundwater and will allow comparison between aquifers. As a result, indicators can be used to identify transboundary aquifers requiring action on specific aspects like vulnerability to pollution or overexploitation. Indicators may also be used to highlight the potential for development in certain areas.