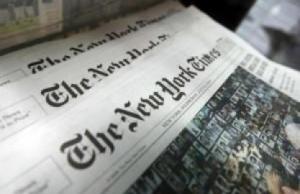 AUSTIN, TEXAS - When cities store water for future use, they often use large lakes created by damming rivers. Now, experts are urging cities to build reservoirs below the ground, where the water cannot evaporate and many of the difficulties associated with above-ground water storage are avoided. "It just makes so much more sense," said Jim Lester, president of the Houston Advanced Research Center, a nonprofit research group. Among other advantages, he said, underground reservoirs are cheaper than their above-ground counterparts.

Australia and the United States have increasingly embraced underground reservoir technology. Within Europe, Belgium and the Netherlands developed systems of storing water in sand dunes decades ago. The water utility that supplies London, Thames Water, stores surplus treated water in a chalk aquifer beneath northeast London, a project that the company expanded after a 2006 drought.

Underground reservoirs could help improve water security in the arid Middle East, according to Thomas Missimer, a visiting professor of environmental science and engineering at the King Abdullah University of Science and Technology in Jeddah, Saudi Arabia. Abu Dhabi is working on two such water-storage systems, he said - one in sand dunes, and the other in a type of alluvial plain. "Locating the right aquifer to achieve what you want is the key," Mr. Missimer said.

The idea of storing water in the earth is not new. Long ago, the Bedouins blocked ravines with large stones, backed by sand. Water collected in the sand and could be extricated by digging, according to Mr. Missimer, who has co-written a book on underground water-storage technology. In the modern world, the United States began using the technology around the 1960s. Typically, water is injected into an aquifer, stored and then pumped back up to the surface for disinfection and use. The technique has the formal and somewhat cumbersome name "aquifer storage and recovery."

Its advantages are myriad, supporters say. Storing water underground averts the need to flood land above-ground, a contentious and potentially litigious process. "You don't flood a bunch of bottomland hardwoods, or take thousands and thousands of acres of cropland out of service," said James Dwyer, an engineer with CH2M Hill, a global engineering and construction company. Compared with above-ground reservoirs, "the space in the subsurface is simply much, much greater, and you don't need to build walls," Theo Olsthoorn, a professor of groundwater hydrology at the Delft University of Technology in the Netherlands, said in an e-mail. In addition to the dune projects, he said, some farmers in western parts of the Netherlands collect rainwater from the roofs of their greenhouses during the fall and winter, inject it into a well for storage and retrieve it during the growing season, he said.

Storing water underground also may reduce the need to dam up rivers, and avoids losing water to evaporation. Evaporation can be such a problem that some reservoirs in arid areas of the world, including western Texas, lose more water each year into the air than people actually use. The aquifer itself can also serve as something of a natural cleanser, according to Mr. Missimer. This especially helps in instances in which water utilities store treated wastewater in the ground, as happens in El Paso, Texas, for example.

An interesting article published in the Global edition of the New York Times (May 1, 2013) by Kaith Galbraith. Read the rest of the article here.