NNC-IAH Publication No.5 - Arsenic in Groundwater: A World Problem 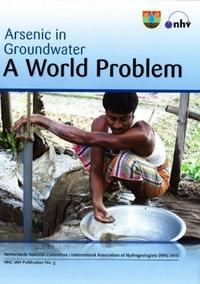 The Netherlands National Committee of the Dutch Chapter of IAH presented their Publication No.5 "Arsenic in Groundwater: A World Problem". IGRAC contributed to this publication along with a number of internationally recognised institutes and universities, among others the British Geological Survey (BGS), the Karolinska Institute and the Amsterdam Vrije Universiteit as well as various UN organisations (WHO, WMO, FAO and UNESCO).

The various contributions deal among others with the occurrence and causes of arsenic contamination and its effects on health and food production. The publication gives a clear and broad insight into the state-of-the-art knowledge of all aspects of arsenic in groundwater. The publication No.5 Arsenic in Groundwater - a World Problem presents the arsenic problem in such way that it becomes accessible to a broad and involved public that normally might not have easy access to scientific literature; giving this publication a rather unique status among the extensive list of existing literature on this subject.

NNC-IAH Publication No. 5 Arsenic in Groundwater - a World Problem can be downloaded as pdf file from both the IGRAC site and the IAH website; it can also be ordered as a ‘hard copy" from the Secretariat Netherlands National Committee of the Ducht Chapter of IAH (see the official announcement for further details).