Side event on groundwater at MOP7 Water Convention 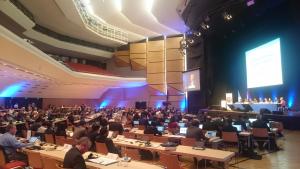 A side event on 'Focus on Groundwater in the 2030 Agenda' organised by UNESCO-IHP was held at the closing day of the Water Convention held in Budapest on 17-19 November 2015. IGRAC contributed to the organisation and the execution of the event. Neno Kukurić presented the long-term DIKTAS project, its achievements and tasks ahead.

The seventh session of the Meeting of the Parties (MOP7) to the UNECE Convention on the Protection and Use of Transboundary Watercourses and International Lakes (Water Convention) took place in Budapest, Hungary, and brought together over 300 participants from all over the world. During this UN intergovernmental forum, organised by UNECE, participants discussed the progress and challenges in transboundary water cooperation.

Withing the framework of the MOP7 Water Convention, UNESCO-IHP organised the side event 'Focus on Groundwater in the 2030 Agenda: Key messages, priorities for action and role of the Convention' in cooperation with, GEF, UNEP, UNDP, FAO, the World Bank, IAH and IGRAC. The event consisted in a blend of presentations and structured dialogues among invited experts, policymakers, donor agencies, UN officials. 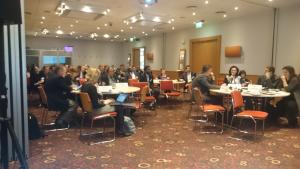 During this side event, presentations were given among with two about recently completed GEF funded projects IGRAC has been involved in, namely TWAP Groundwater and DIKTAS. The latter was presented by IGRAC Director Neno Kukuric.

The side event also considered the role of the Water Convention in removing barriers that hinder effective transboundary waters management and transboundary cooperation and in consideration of the action to be taken for the achievement of the SDGs Goal number 6, “Ensure access to water and sanitation for all”’, panelists also debated about the integration of indicators related to transboundary aquifers governance and management to the horizon of 2030.

The DIKTAS project is the first ever attempted globally to introduce sustainable integrated management principles in a transboundary karst freshwater aquifer of the magnitude of the Dinaric Karst System. At the global level the project aims at focusing the attention of the international community on the huge but vulnerable water resources contained in karst aquifers (carbonatic rock formations), which are widespread globally, but poorly understood. The Dinaric Karst Aquifer System, shared by several countries and one of the world’s largest, has been identified as an ideal opportunity for applying new and integrated management approaches to these unique freshwater resources and ecosystems.