Sustainable development goals: all you need to know 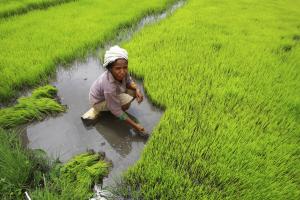 This year, the millennium development goals that were launched in 2000 to make global progress on poverty, education, health, hunger and the environment will expire. UN member states are finalising the sustainable development goals that will replace them and IGRAC previously drafted a position paper regarding the inclusion of groundwater in those 'SDGs'. But what are the SDGs and what do they aim for? The Guardian published a news item that tells you all you need to know about these goals.

What are the sustainable development goals?

The sustainable development goals (SDGs) are a new, universal set of goals, targets and indicators that UN member states will be expected to use to frame their agendas and political policies over the next 15 years. The SDGs follow, and expand on, the millennium development goals (MDGs), which were agreed by governments in 2000, and are due to expire at the end of this year.

Why do we need another set of goals?

There is broad agreement that while the MDGs provided a focal point for governments on which to hinge their policies and overseas aid programmes to end poverty and improve the lives of poor people - as well as provide a rallying point for NGOs to hold them to account - they have been criticised for being too narrow.

The eight MDGs - reduce poverty and hunger; achieve universal education; promote gender equality; reduce child and maternal deaths; combat HIV, malaria and other diseases; ensure environmental sustainability; develop global partnerships - failed to consider the root causes of poverty, or gender inequality, or the holistic nature of development. The goals made no mention of human rights, nor specifically addressed economic development. While the MDGs, in theory, applied to all countries, in reality, they were considered targets for poor countries to achieve, with finance from wealthy states. Every country will be expected to work towards achieving the SDGs.

As the MDG deadline approaches, around 1 billion people still live on less then $1.25 a day - the World Bank measure on poverty - and more than 800 million people do not have enough food to eat. Women are still fighting hard for their rights, and millions of women still die in childbirth.

What are the proposed 17 goals?

Within the goals are a proposed 169 targets, to put a bit of meat on the bones. Proposed targets under goal one, for example, include reducing by at least half the number of people living in poverty by 2030, and eradicating extreme poverty (people living on less than $1.25 a day). Under goal five, there's a proposed target on eliminating violence against women. Under goal 16 sits a target to promote the rule of law and equal access to justice.

How were the goals chosen?

Unlike the MDGs, which were drawn up by a group of men in the basement of UN headquarters (or so the legend goes), the UN has conducted the largest consultation programme in its history to gauge opinion on what the SDGs should include.

Establishing post-2015 goals was an outcome of the Rio+20 summit in 2012, which mandated the creation of an open working group to come up with a draft set.

The open working group, with representatives from 70 countries, had its first meeting in March 2013 and published its final draft, with its 17 suggestions, in July 2014. The draft was presented to the UN general assembly in September.

Alongside the open working group, the UN conducted a series of "global conversations", which included 11 thematic and 83 national consultations, and door-to-door surveys. It also launched an online My World survey asking people to prioritise the areas they'd like to see addressed in the goals. The results of the consultations should have fed into the the working group's discussions.

Are governments happy about the proposed 17 goals?

The majority seem to be, but a handful of member states, including the UK and Japan, aren't so keen. Some countries feel that 17 goals are too unwieldy to implement or sell to the public and would like a narrower brief. Or so they say. Some believe the underlying reason is to get rid of some of the more uncomfortable goals, such as those relating to the environment. Britain's prime minister, David Cameron, has publicly said he wants 12 goals at the most, preferably 10. It's not clear, though, which goals the UK government would like taken out if they had the choice.

Some NGOs also believe there are too many goals, but there is a general consensus that it's better to have 17 goals that include targets on women's empowerment, good governance, and peace and security, for example, than fewer goals that don't address these issues.

Is the number of goals expected to change?

Those who have been involved in the process say no, although they do expect fewer targets. Many of the proposed targets are more political statement than measurable achievement at the moment.

In his synthesis report on the SDGs in December, UN secretary general Ban Ki-moon gave no hint that he would like to see the number of goals reduced. In a bid to help governments to frame the goals, Ban clustered them into six "essential elements": dignity, prosperity, justice, partnership, planet, people.

Amina Mohammed, the UN secretary general's special adviser on post-2015 development planning, said it had been a hard fight to get the number of goals down to 17, so there would be strong resistance to reduce them further.

Member states will begin formal discussions on the content of the SDGs on 19 January, and are expected to meet each month until September. Any serious faultlines should be evident over the next three to four months.

How will the goals be funded?

That's the trillion-dollar question. Rough calculations from the intergovernmental committee of experts on sustainable development financing have put the cost of providing a social safety net to eradicate extreme poverty at about $66bn a year, while annual investments in improving infrastructure (water, agriculture, transport, power) could be up to a total of $7tn globally.

In its report last year, the committee said public finance and aid would be central to support the implementation of the SDGs. But it insisted that money generated from the private sector, through tax reforms, and through a crackdown on illicit financial flows and corruption was also vital.

A major conference on financing for SDGs will be held in Addis Ababa, Ethiopia, in July, where it is hoped that concrete financing will be agreed.

When will the new goals come into force?

If member states agree the draft set of 17 SDGs at a UN summit in New York in September, they will become applicable from January 2016. The expected deadline for the SDGS is 2030.

IGRAC has drafted a position paper regarding the inclusion of groundwater in the Sustainable Development Goals (SDGs). A number of stakeholders are recommending that a dedicated SDG for water be created. Within this context, IGRAC recommends that role of groundwater resources in sustainable development be taken into consideration.