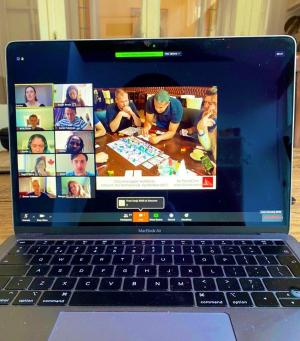 On 11 May 2020, a webinar on serious games in transboundary groundwater cooperation was held. The Dutch IHP-HWRP Committee had taken the initiative to organise a regional activity in the Rhine region, in cooperation with the Water Youth Network and IGRAC. This activity was supposed to be a 3-day workshop in The Netherlands, but due to the COVID-19 pandemic the organisers were forced to postpone the workshop to (hopefully) in the second half of 2020. However, to already give a sneak preview to selected participants of what that this workshop will entail and to keep the positive momentum, the organisers decided to hold a webinar on serious gaming in the context of transboundary aquifer cooperation.

Acknowledging the importance of youth in transboundary water cooperation, the webinar, as well as the future workshop, was focused specifically on bringing together young professionals living in the Rhine Commission countries Belgium, France, Germany, the Netherlands and Switzerland. From each country, five young representatives were selected to participate.

The main objectives of the 3-day workshop will be to share some basic principles about serious gaming, after which mixed groups will work on the creation of their own serious game with focus on transboundary groundwater cooperation. Although it was not realistic to achieve the same in a 2-hour webinar, the structure was the same, nevertheless. After a short welcome by Emilie Broek of the Dutch IHP-HWRP and short presentation by Serious Game specialist Joanne Craven on the theory behind serious games, the participants moved into break-out sessions.

In these break-out sessions, the small groups had to come up with a rough concept for a serious game. These concepts had to include a clear game element (how would one win), a link to transboundary groundwater and some learning objectives that players would achieve by playing it. All groups were assisted by representatives of the organising parties, including Claudia Ruz Vargas and Stefan Siepman of IGRAC. Eventually, all participants returned to the plenary call, in which one representative of each group pitched their ideas after which a winner was announced.

The organisers intend to welcome all participants in a later stage for the initially planned 3-day workshop. In that workshop, IGRAC will also facilitate a session of its Groundwater Game. In this serious game, each player is a farmer who makes a series of decisions around the development of groundwater for irrigated agriculture. The game provides opportunities to learn concepts related to groundwater use such as drawdown and depletion as well as gain insight into common pool resources, groundwater governance, groundwater management, and collective action. For more information about The Groundwater Game click here.